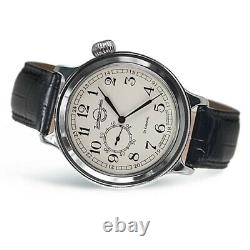 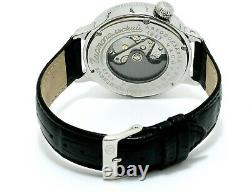 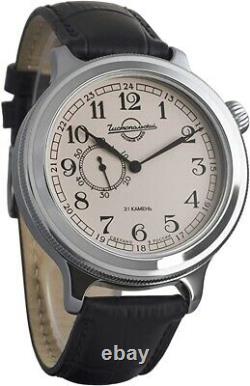 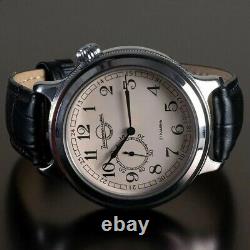 Vostok'Retro Kirovskie K-43 Automatic' - ref. 550931 with a Vostok 2415.02 (31 jewels) automatic movement in a stainless steel case with an exhibition case back. It is also possible to wind up with the winding stem if not worn for some time. The watch displays a pergament (parchment) coloured dial with black lettering and features the old Chistopol Watch Factory logo which reads reads'????????????? - translated as Chistopol Watch Factory. It also features a small seconds sub dial at the 9 o'clock position. The watch model was released in 2017 to commemorate the 75th anniversary of the establishment of the factory and this particular watch is the most recent (2021) version. The Chistopol State Watch Factory in the Russian republic of Tatarstan was the seed of the much-loved Vostok brand. 43 watch watch model that was produced there inspired the current Vostok Retro. Like the very first model it has a large case measuring 43mm without the crown, but this has been fitted with an up-to-date and practical automatic movement. In 1927, in an effort to contribute to overall industrial growth and also to combat a shortage of timepieces, the Soviet government made a decision to establish and develop an indigenous, State-owned watch industry. In 1930, the First State Watch Factory in Moscow was built and by November the same year the first 50 (pocket) watches had been completed.

The watch design chosen was designated the Type-1, also known as? , meaning pocket, and 43 refers to the diameter of the movement in millimetres. A decree was signed on 16th December 1935 awarding the First State Watch Factory the name of Kirov'??????

Sergei Kirov was a prominent early Bolshevik leader in the USSR, rising through the ranks to become the party head in Leningrad. He was viewed as an oppositional leader to the extreme policies of Stalin, and on 1st December 1934, he was shot and killed. On 22nd June 1941 German troops invaded the Soviet Union. Their advance was practically unstoppable in the first months of the offensive and part of the German army found itself a mere 15 miles from Moscow, on an open front that was almost 1,000 miles in length. However, the harsh winter ahead was fast approaching and with it came the so-called Battle of Moscow, which was to be a first turning point (defeat) of the German armies during the Second World War. Soon after the German invasion the Soviets began to evacuate enormous amounts of people and assets from the war front to continental zones further east in the country. These measures were aimed at stopping looting by the Germans of strategic industries that might have been useful to them for the war effort, as well as goods of artistic value, and to prevent the seizing of trained civilians such as scientists, specialists, engineers and artists, etc. The watch factories of Moscow were also moved to the eastern regions. In October 1941 the workers and equipment of Moscow's Second Watch Factory (this factory would eventually be rebranded as Slava in 1964), were evacuated to Chistopol in the Tatar SSR (Tatarstan), around 500 miles east of Moscow, for the production of watches and surveillance systems. Designated as factory 835, the plant would be known as Chistopol State Watch Factory, or GKVMV. The original plan was to evacuate 280 miles further up the Kama River, but due to freezing conditions vessels could not advance further than Chistopol. The workers and equipment of Moscow's First Watch Factory (this factory would eventually be rebranded as Agat in 1962) were similarly evacuated to Zlatoust, a city east of the Ural mountains some 1,000 miles from Moscow, and that plant was designated as factory 834.

Only in 1942, when at full capacity, did the Chistopol State Watch Factory restart production of the K-43 watch which was known as'Kirovskie' from the old name of the First State Watch Factory where the first? During the early years watches from Chistopol had no logo, nor a year stamp, as they were produced using the evacuated Type-1 equipment of the 2nd MWF. As of 1947 the Chistopol logo was added to watches.

In 1948 Chistopol Watch Factory produced their very first wristwatch, with a relatively narrow lug width of 16mm (compared to 20mm on the re-issued timepiece), based on the K-43 pocket watch design. 43 watches where produced in 1958. Since 1969 all watches produced by the factory have had the same'?????? (meaning East) brand name and the company was renamed Chistopol Watch Factory?????? The proper English transliteration of?????? Is Vostok, but during the Soviet era watches for the domestic Russian market were branded?????? And the export versions were branded Wostok. The reason for this was because watches destined for export were mainly to Warsaw Pact countries, expecially to GDR where the German transliteration of the Cyrillic'B' is'W', not'V' as in English. The same was true in Ukraine which uses the Cyrillic alphabet.

Whilst similar to Russian, Ukrainian is a separate language where the Cyrillic'B' is usually transliterated to'W'. However, from 1991 after the collapse of the Soviet Union, the watches produced at Chistopol have generally been known by their Vostok name. Case width (3 o'clock to 9 o'clock): 43.6mm.

This item is in the category "Jewellery & Watches\Watches, Parts & Accessories\Watches\Wristwatches". The seller is "pastimes4gent" and is located in this country: GB. This item can be shipped to United Kingdom.